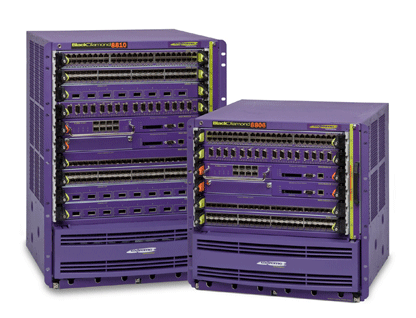 Sorry, this product is no longer available, please contact us for a replacement.

A high-performance network connection, whether used to connect PCs and IP telephones at the access layer or to interconnect servers in a cluster, is only useful if it is also highly available. BlackDiamond 8800 series modular switching family incorporates extensive hardware redundancy and a modular OS-ExtremeXOS-that provides the network recovery required by converged applications.

Redundant Management Modules
The BlackDiamond 8800 series of modular switches are configured with an automatic failover mechanism so that if one Management Switch Module (MSM) fails, the second MSM will automatically take over management responsibility for the entire switch. This feature is critical for networks running voice and other mission-critical applications. (This capability is not available for the BlackDiamond 8500-series modules.)

Preemptive Multitasking and Protected Memory
BlackDiamond 8800 series switches allow each of many protocols such as Open Shortest Path First (OSPF) and Spanning Tree to run as separate OS processes that are protected from each other. This drives increased system integrity and inherently protects against Denial of Service (DoS) attacks.

Process Monitoring and Restart
ExtremeXOS dramatically increases network availability using process monitoring and restart. Each independent OS process is monitored in real time. If a process becomes unresponsive or stops running, it can be automatically restarted.

Loadable Software Modules
The modular design of ExtremeXOS allows the upgrading of individual software modules, should this be necessary, leading to higher availability in the network (see Figure 1). 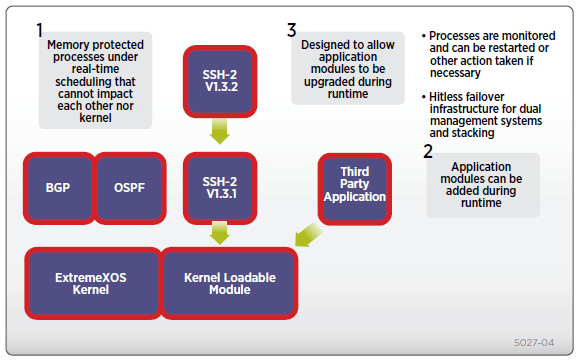 Ethernet Automatic Protection Switching (EAPS)
EAPS allows the IP network to provide the level of resiliency and uptime that users expect from their traditional voice networks. EAPS is more adaptable than Spanning Tree or Rapid Spanning Tree Protocols, offering sub-second (less than 50 milliseconds) recovery and delivering consistent failover regardless of number of VLANs, number of network nodes or network topology. In most situations, VoIP calls will not drop and digital video feeds will not freeze or pixelize because EAPS allows the network to recover almost transparently from link failure.

Software Enhanced Availability
Software enhanced availability allows users to remain connected to the network even if part of the network infrastructure is down. BlackDiamond 8800 series switches constantly check for problems in the uplink connections using advanced Layer 3 protocols such as OSPF, VRRP and Extreme Standby Router Protocol™ (ESRP, supported in Layer 2 or Layer 3), and dynamically route around the problem.

BlackDiamond 8800 series switches deliver high-performance, cost-effective connectivity to address networking trends such as the increasing number of devices at the edge of the network: IP telephones, wireless Access Points (APs), and other devices. These networking trends drive the requirement for Gigabit Ethernet to the desktop and the use of 10 Gigabit Ethernet as an interconnect technology.

Direct Attach™ eliminates switching at the virtual switch layer, simplifying the network and improving performance. Direct Attach enables data center simplification by reducing network tiers from 4 or 5 tiers to just 3 or 2 tiers, depending on the size of the data center. (Requires the Direct Attach Feature Pack, part number 11011.)

XNV™ (ExtremeXOS Network Virtualization) is a set of software modules for the ExtremeXOS® based switching product portfolio, and is available via the Data Center Feature Pack for Extreme Networks Ridgeline™, a network and service management application. XNV brings insight, control and automation for highly virtualized data centers to the network.

Priority-based Flow Control (PFC, or IEEE 802.1Qbb) allows network traffic to be controlled independently based on Class of Service. PFC allows network traffic that requires lossless traffic throughput to be prioritized, while other traffic types that do not require or perform better without PFC can continue as normal. (Requires 8900-10G24X-c I/O module(s), part number 41632B.)

Implementing a secure network means providing protection at the network perimeter as well as the core. BlackDiamond 8800 series switches use advanced security functions in protecting your network from known or potential threats.

Network Login and Dynamic Security Profile
Network Login capability implemented in ExtremeXOS enforces user admission and usage policies. BlackDiamond 8800 series switches support a comprehensive range of Network Login options by providing an 802.1x agent-based approach, a Web-based (agentless) login capability for guests and a MAC-based authentication model for devices. With these modes of Network Login, only authorised users and devices can connect to the network and be assigned to the appropriate VLAN. The Universal Port scripting framework available in BlackDiamond 8800 series switches lets you implement Dynamic Security Profiles which, in sync with Network Login, allows you to implement fine grained and robust security policies. Upon authentication, the switch can load dynamic ACL/ QoS profiles for a user or group of users, to deny/allow access to the application servers or segments within the network.

Multiple Supplicant Support
Converged network designs often involve the use of shared ports for IP Telephony and wireless access. Multiple supplicant capability on a switch delivers secured access in such designs by uniquely authenticating and applying appropriate policies and VLANs for each user on a shared port.

Host Integrity Checking
Host integrity checking helps keep infected or noncompliant machines off the network. BlackDiamond 8800 series switches support a host integrity or endpoint integrity solution that is based on the model from the Trusted Computing Group.

Identity Manager
Identity Manager allows network managers to track users who access their network. User identity is captured based on NetLogin authentication, LLDP discovery and Kerberos snooping. ExtremeXOS uses the information to then report on the MAC, VLAN, computer hostname, and port location of the user. Further, Identity Manager can create both roles and policies, and then bind them together to create role-based profiles based on organizational structure or other logical groupings, and apply them across multiple users to allow appropriate access to network resources.

sFlow
sFlow® is a sampling technology that provides the ability to sample application-level traffic flows on all interfaces simultaneously.

Port Mirroring
BlackDiamond 8800 series switches support many-to-one and cross module port mirroring. This capability can be used to mirror traffic to an external network appliance such as an intrusion detection device for trend analysis or be utilized by a network administrator as a diagnostic tool when fending off a network attack.

Denial of Service (DoS) Protection
BlackDiamond 8800 series switches handle DoS attacks gracefully. If the switch detects an unusually large number of packets in the CPU input queue, it will assemble ACLs that automatically stop these packets from reaching the CPU. After a period of time, the ACLs are removed. If the attack continues, they are reinstalled.

Policy-Based Routing
Policy-based routing provides a flexible mechanism for network administrators to customize the flow of traffic within their networks. ACLs configured on the switch can redirect packets away from their normal path to another physical switch port. Packets are selected according to their ACL match conditions such as QoS, VLAN, IP addresses, protocol, port number or other criteria.

ASIC-Based Longest Preﬁx Match
LPM routing eliminates the need for control plane software to learn new flows and allows the network to be resilient under a DoS attack.

Secure Management
The use of protocols like SSH2, SCP and SNMPv3 supported by a BlackDiamond 8800 series switch prevents the interception of management communications and man-in-the-middle attacks.

HPCC consists of hundreds or thousands of servers working cooperatively to solve large computational problems. With the use of relatively inexpensive and compact 1RU servers, a significant amount of processing power can be cost-effectively packed into a relatively small footprint. BlackDiamond 8800 series switches address the need for high-performance and cost-effective connectivity required for data center and HPCC applications using Gigabit and 10 Gigabit Ethernet as the interconnect technology 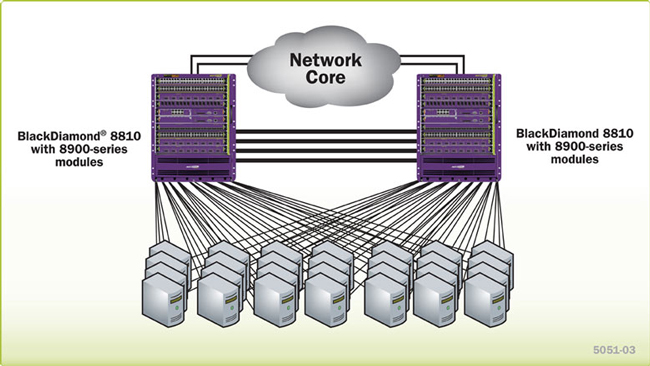 BlackDiamond 8800 switches deliver high-performance and cost-effective connectivity to support the increasing number of IP telephones, wireless APs and other devices at the edge of the network, Gigabit Ethernet connections to the desktop and the use of gigabit and 10 Gigabit Ethernet as an interconnect technology. BlackDiamond 8800 series switches allow the traditional edge layer and aggregation layer of the network to be collapsed into a single unified access layer. 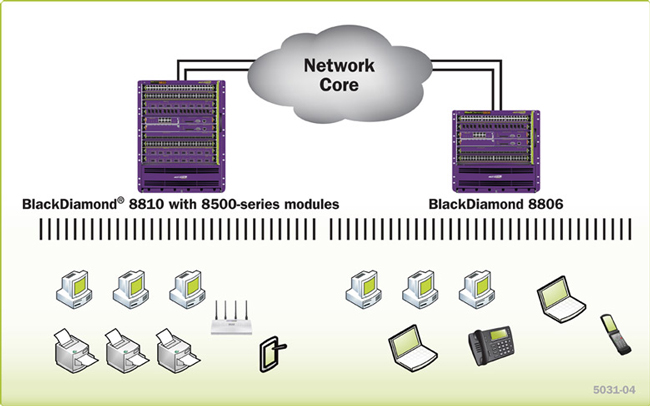